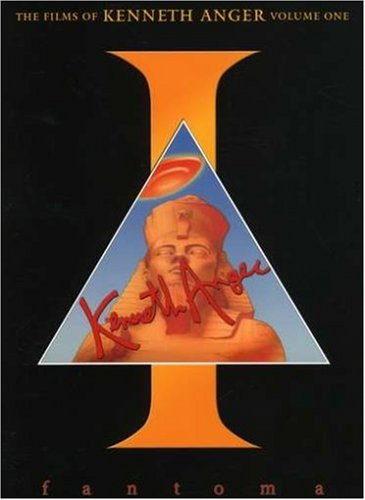 Cinematic magician, legendary provocateur, author of the infamous HOLLYWOOD BABYLON books and creator of some of the most striking and beautiful works in the history of film, Kenneth Anger is a singular figure in post-war American culture.
A major influence on everything from the films of Martin Scorsese, Rainer Werner Fassbinder and David Lynch to the pop art of Andy Warhol to MTV, Anger's work serves as a talisman of universal symbols and personal obsessions, combining myth, artifice and ritual to render cinema with the power of spell or incantation.
Covering the first half of Anger's career, from his landmark debut FIREWORKS in 1947 to his epic bacchanalia INAGURATION OF THE PLEASURE DOME, Fantoma is very proud to present the long-awaited first volume of films by this revolutionary and groundbreaking maverick, painstakingly restored and presented on DVD for the first time.

Recently restored by the UCLA Film Archive, Kenneth Anger's difficult-to-see early films are finally collected here onto DVD, alongside optional fascinating commentary by Anger himself. Scores of Anger fans have previously persevered through horrid rented VHS copies of these films, due to their inimitable beauty and strangeness. Anger is renowned for filmic experimentation that portrays invented occult or druggy subcultures while formally rejecting conventions of blockbuster filmmaking. As a result, he has also become the unofficial godfather of the music video, for his groundbreaking use of soundtracks that, in these early films at least, meld classical music with '50s bubble gum pop and '60s folk for a hypnotic, psychedelic effect. Fireworks is a monumental film credited as gay cinema's first masterpiece. Rabbit's Moon, presented in its original 16-minute version, and Eaux d'Artifice are Anger's two other brilliant black-and-white studies of European culture, namely Miming and the 17th century art of Water Fountains. Anger's commentary reveals directorial secrets, for example that Eaux d'Artifice's black-and-white appearance is tromp l'oeil that involved both manipulation of the camera and film development to heighten the film's metaphoric notion of artifice. Puce Moment, starring Yvonne Marquis, is a colorful, campy tribute to silent film glamour, in which the star debates what gown to wear for a party. Inauguration of the Pleasure Dome is the first Anger film to investigate mythology in relation to Aleister Crowley's witchcraft, subject matter that consumed Anger in consequent projects. Kenneth Anger's films exist in a timeless, stylized void that is both alluring and terrifying. Watching these selections will prove that Anger's aesthetic contributions to cinema are noticeable fifty years later. --Trinie Dalton

Keep calm and bake on. The competition heats up as a fresh batch of bakers -- and a crispy new presenter -- put their sweet spin on delectable edibles. Watch now.
Food |September 13

Want to cut your risk of serious COVID-19? New data shows vaccines are hitting the mark

What window cleaners see while dangling from a skyscraper

Will anyone ever really be the same after the pandemic?

You really know your pencils if you can get 9/9

Add some “good” to your morning and evening.

A variety of newsletters you'll love, delivered straight to you.

Create a free account to stream exclusive series and live, local TV from across Canada  Create an account

Radio -As It Happens |September 8|

He grew up with a strict code of honesty. It played havoc with his life

Amphibious fish out of water get a brain boost from exercise

She dedicated her life to abortion rights, and died as they're being rolled back in many U.S. states

Radio -As It Happens |September 9
Q&A

Who does all the drawings for The Great Canadian Baking Show?

What qualifies for a COVID-19 vaccine exemption?